Theresa's mentor and the queen of the underworld. She is tall, young, and possesses two distinct temperaments - one gentle and lighthearted, while the other, which is brought out when she is angry, is uncontrollable and spiteful. While enraged her surroundings become dark and her skin appears light-blue. To fulfill her ancient agreement, to spend half her time in the Underworld with her husband Hades, Persephone has in her solarium a secret passageway to his realm hidden behind The Four seasons. This passage allows the heroes access to the Underworld without fulfilling the usual requirement of being dead. She seems to be fond of gardening, not surprisingly given that she is the daughter of Demeter and a goddess of spring, whom she affectionately refers to as "Mommy". She also appears to share a loving relationship with her husband and their "puppy," Cerberus. Her connection to the supernatural and vast wealth (as a result of being married to Hades) is something she shares with her affluent and clairvoyant student, Theresa

Aphrodite and Persephone had fought over Adonis, which resulted in Aphrodite locking his spirit away in Pandora's Box. Aphrodite forgot and was freed several millennia later by Neil. He instantly gains the attention of all female company in sight, much to Neil's displeasure. His reappearance causes Aphrodite and Persephone to fight over the hunter again, causing Envy to appear. Envy attempts to curse Neil, who is saved by Adonis, but is possessed with envy and attempts to kill Neil, until Envy is trapped in Pandora's Box. Adonis decides to give up on Persephone and Aphrodite in order to go to a place where strength of character matters more than appearance so that he will be treated as a person and not an object.

In Greek mythology, Persephone was the Queen of the Underworld and a daughter of Demeter and Zeus. In the Olympian version, she also becomes the consort of Hades when he becomes the deity that governs the underworld. Her mother, vainly searching for her, vows that until her daughter is returned to her, the earth would remain barren. Eventually, Persephone is returned, but because she had eaten seeds from a pomegranate, Hades came to a compromise: for part of the year, Persephone would live with him, during which time the earth's vegetation would die; according to the Greeks, this is why we have winters. 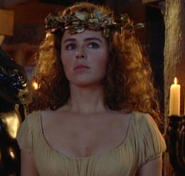 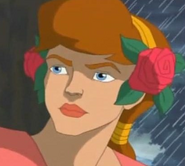 Mythic Warriors: Guardians
of the Legend
1998 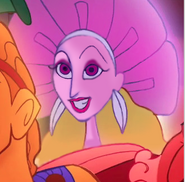 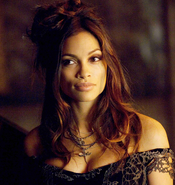 Percy Jackson & the Olympians
2010
Add a photo to this gallery

After Peirithous and Theseus' wives died, they pledged to carry off daughters of Zeus; Theseus chose Helen of Sparta and together they kidnapped her when she was 13 years old and were going to wait until she was older to marry. Pirithous chose a more dangerous prize, Persephone herself. They travelled to The Underworld, and stopped to rest on the Chair of Forgetfulness and found themselves unable to stand up from the rock as they saw The Furies appear before them.

Hercules freed Theseus from the chair, but the earth shook when he attempted to free Pirithous. He had committed too great a crime for wanting the wife of a god.

Adonis
Queen Myrrha was cursed by Aphrodite with insatiable lust for her own father, King Cinyras after bragged that her daughter was more beautiful than the goddess. Driven out after becoming pregnant, Myrrha was changed into a myrrh tree but still gave birth to Adonis.

Aphrodite took him to The Underworld to be fostered by Persephone. Adonis grew into an astonishingly handsome young man, causing Aphrodite and Persephone to feud over him Zeus settled the dispute by decreeing that Adonis would spend one third of the year with Aphrodite, one third with Persephone, and one third with whomever he chose. Adonis chose Aphrodite. One day while Adonis was hunting, he was wounded by a wild boar and bled to death in Aphrodite's arms. The boar was either sent by Ares, who was jealous that Aphrodite was spending so much time with him, or Artemis, who wanted revenge against Aphrodite for killing her devoted follower Hippolytus.

Retrieved from "https://classofthetitans.fandom.com/wiki/Persephone?oldid=12966"
Community content is available under CC-BY-SA unless otherwise noted.